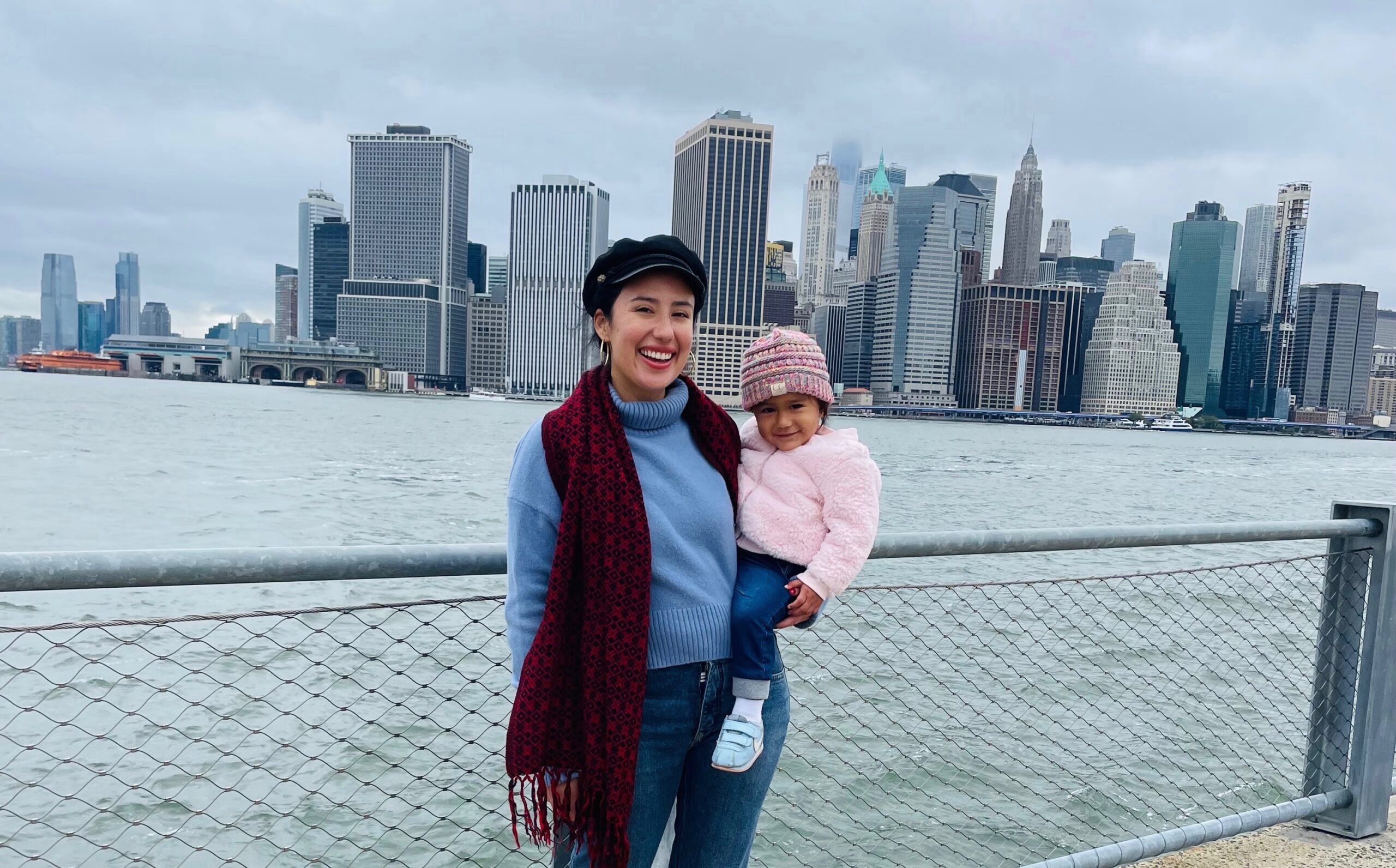 A few weeks ago, my husband Max, our toddler Ella, and I flew to New York for seven days to explore and hang out with Joanna and the Cup of Jo team. This was my first time visiting New York as an adult*, and as soon as I stepped out of JFK, I launched into 168 hours of absorbing the city like a sponge — including the sweet smell of roasted nuts from midtown food carts. And how you can feel like a goldfish and a spy whenever you open your apartment windows. And seeing Brooklyn brownstones turn into disco balls as they reflect the evening golden hour. Here are five cultural observations I can’t stop thinking about… 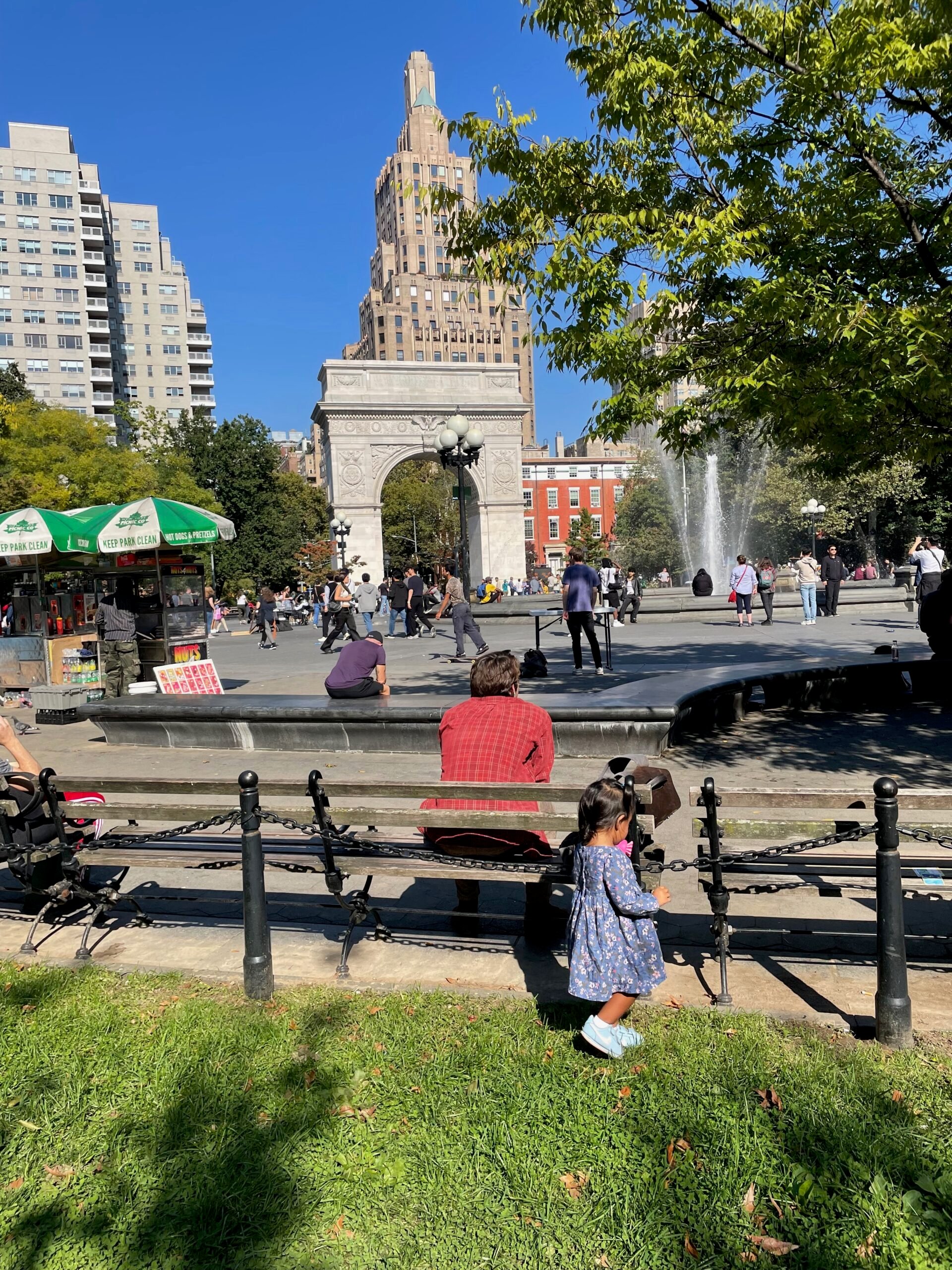 People always talk about a few New York traits: the pizza, the rats, the Empire State Building. But how have I never heard about the parks?! Every one we visited was beautiful, clean, and alive. One fall afternoon in Washington Square Park, people sprawled on the grass — reading books, taking naps, eating picnics — while a jazz band played romantic tunes. The playgrounds we visited, like Brooklyn’s Pier 6 and Central Park’s Ancient Playgroundhave sculptural climbing structures and views of iconic landmarks like The Met and the Manhattan Skyline. Also, parkgoers are chatty. Saturday mornings felt like cocktail parties — while trailing kids, parents would strike up conversations about shows they watch at night or what neighborhood restaurants are worth trying. With our toddler in tow, we spent a lot of time at playgrounds instead of the Statue of Liberty or Times Square; and at first, I was afraid that we wouldn’t get the full tourist experience. But slowing down and chatting with strangers was such a fun, easy way to experience a new place. 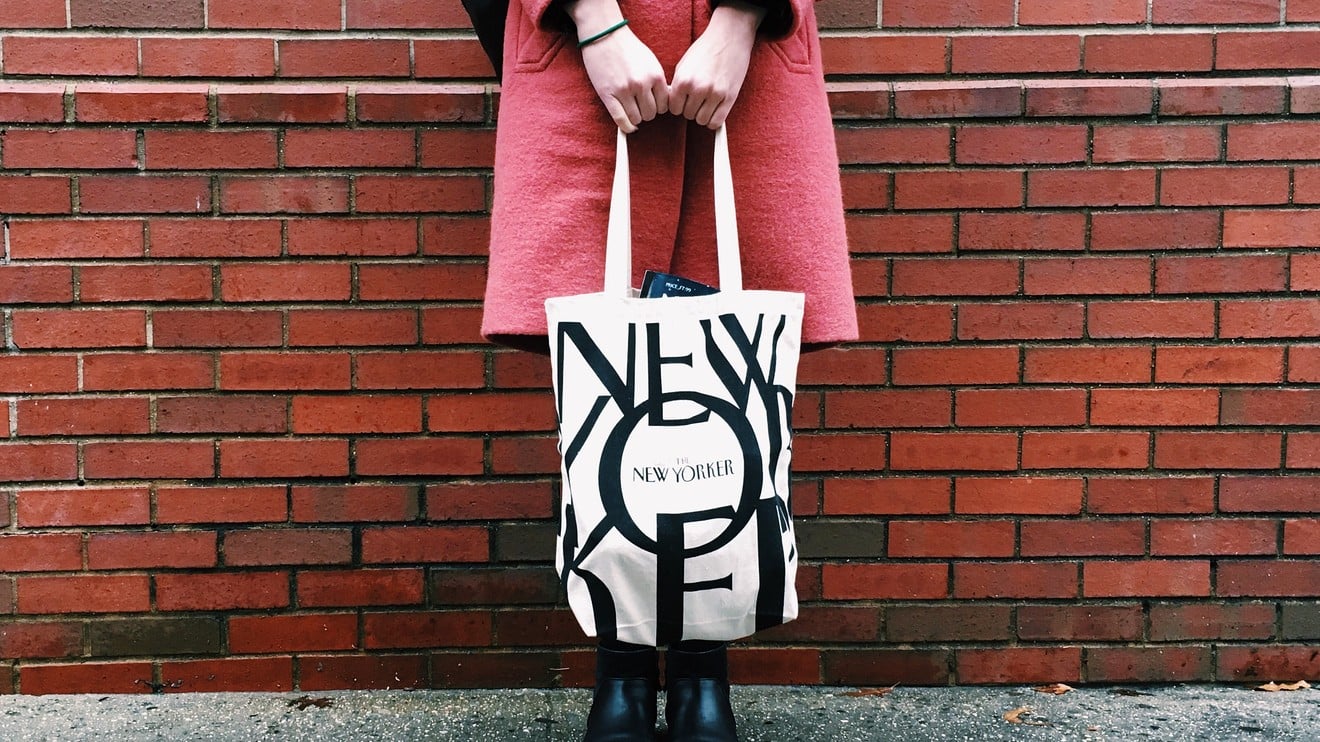 2. The New Yorker tote is everywhere.

I’m not kidding when I say I saw more than 30 people walking around with a New Yorker tote slung over their shoulders, from the Upper East Side to the West Village to Coney Island. Now I plan to whip out my well-loved Shakespeare and Company bag this winter. Also, you’re damn right if you think I subscribed to The New Yorker just to get my own tote. I love a trend, people! 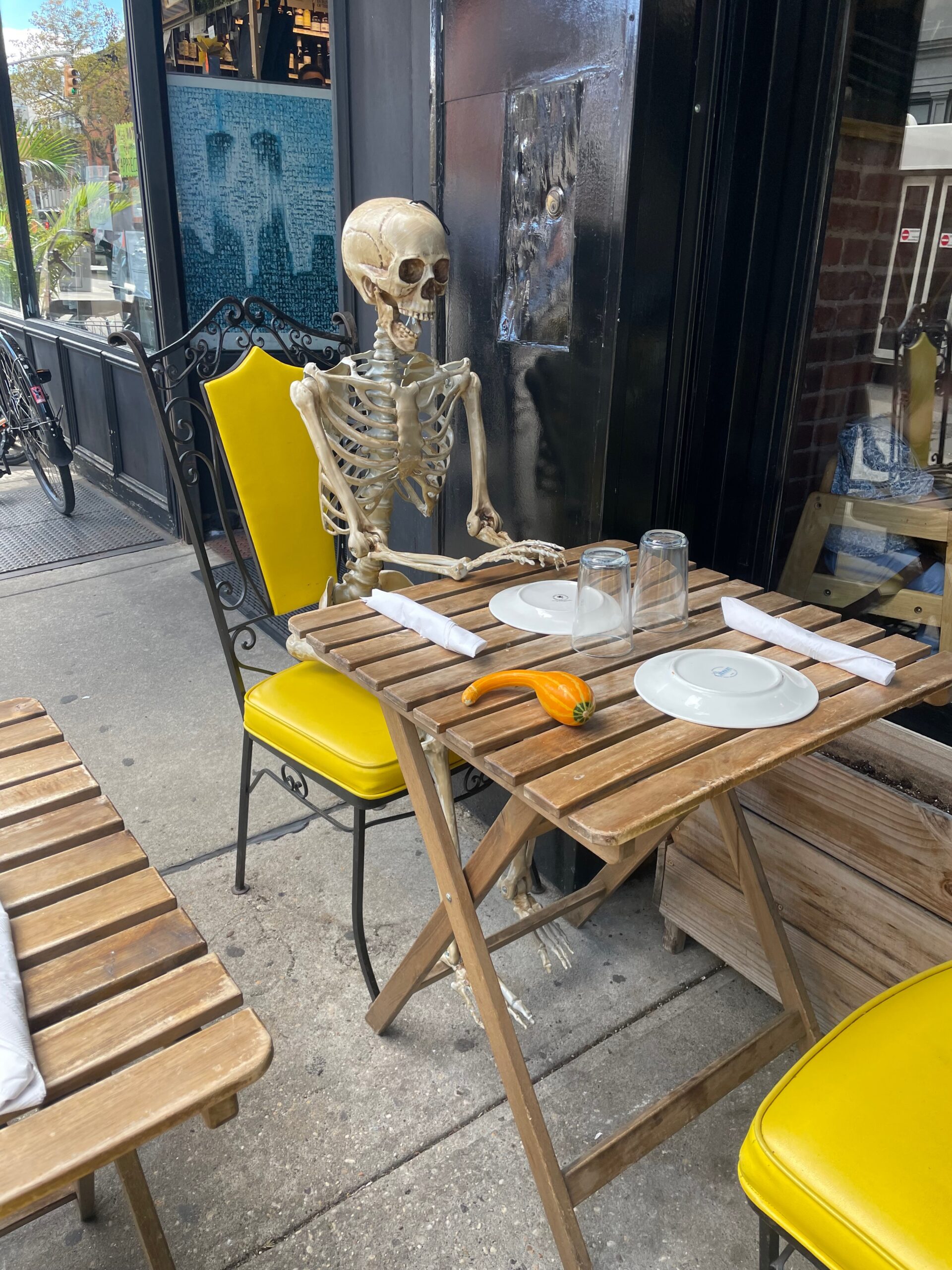 In every direction, we saw giant red oak trees, bodega pumpkin displays and skeletons sitting at restaurant tables. I expect to see Halloween decorations like that in the suburbs, where I grew up, but I wasn’t expecting them in a big city. Reader, I would marry fall NYC. 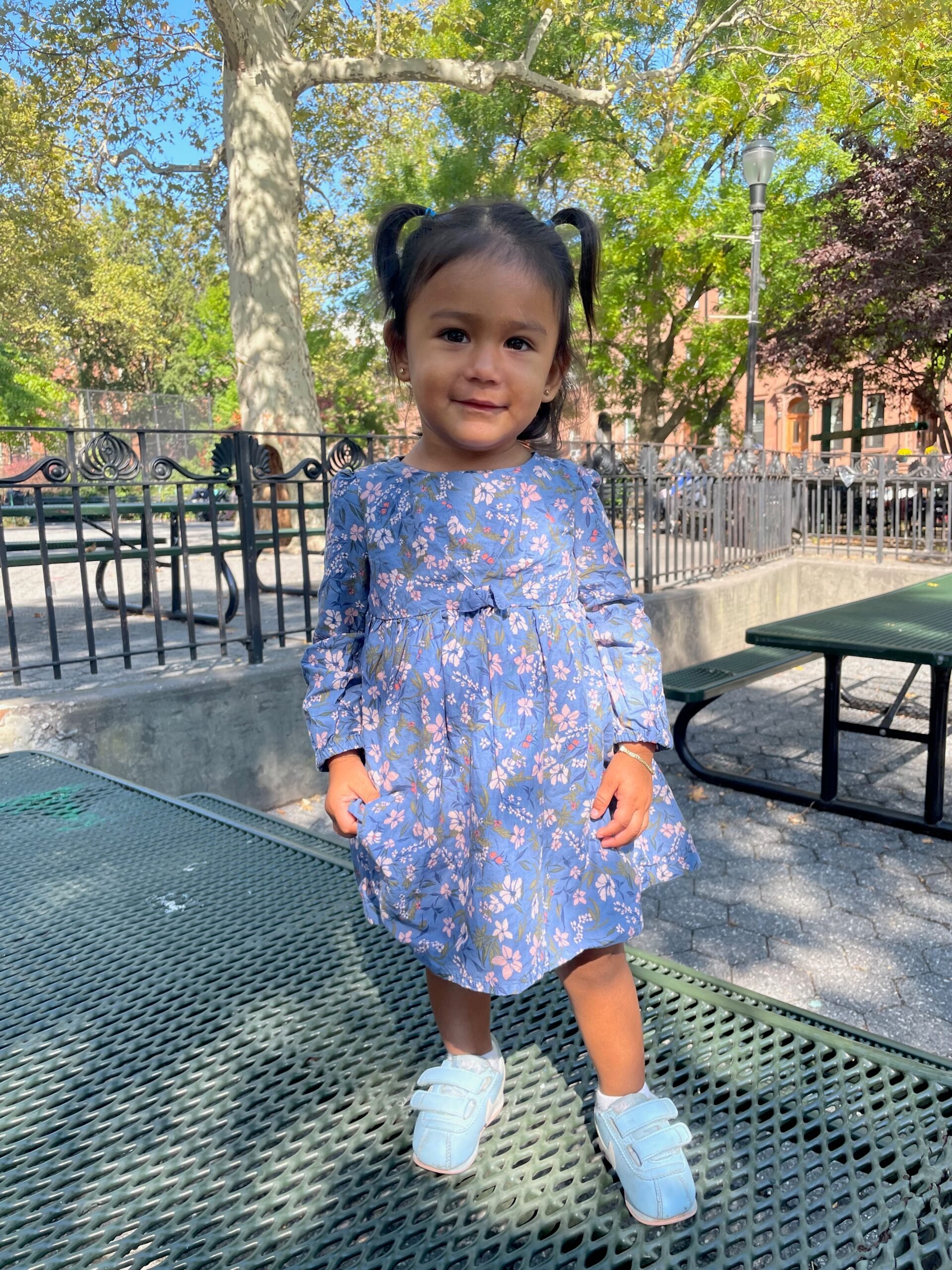 New Yorkers have a reputation for no-nonsense personalities. So, I worried about how people might reaction if Ella wiggled at restaurants or melted down on the subway. But, during our trip, people were so kind. While eating lunch at Cafe Cluny, Ella was playing with animal toysand now and again, she would say “Oh no!” and roll them to two friends — one older man and woman — sitting at the next table. Instead of getting annoyed, they would hand the toys back to Ella and say, “ Thanks for making our day!” My mama heart swelled. And during subway rides, someone would always play peek-a-boo with Ella or pat her on the head. 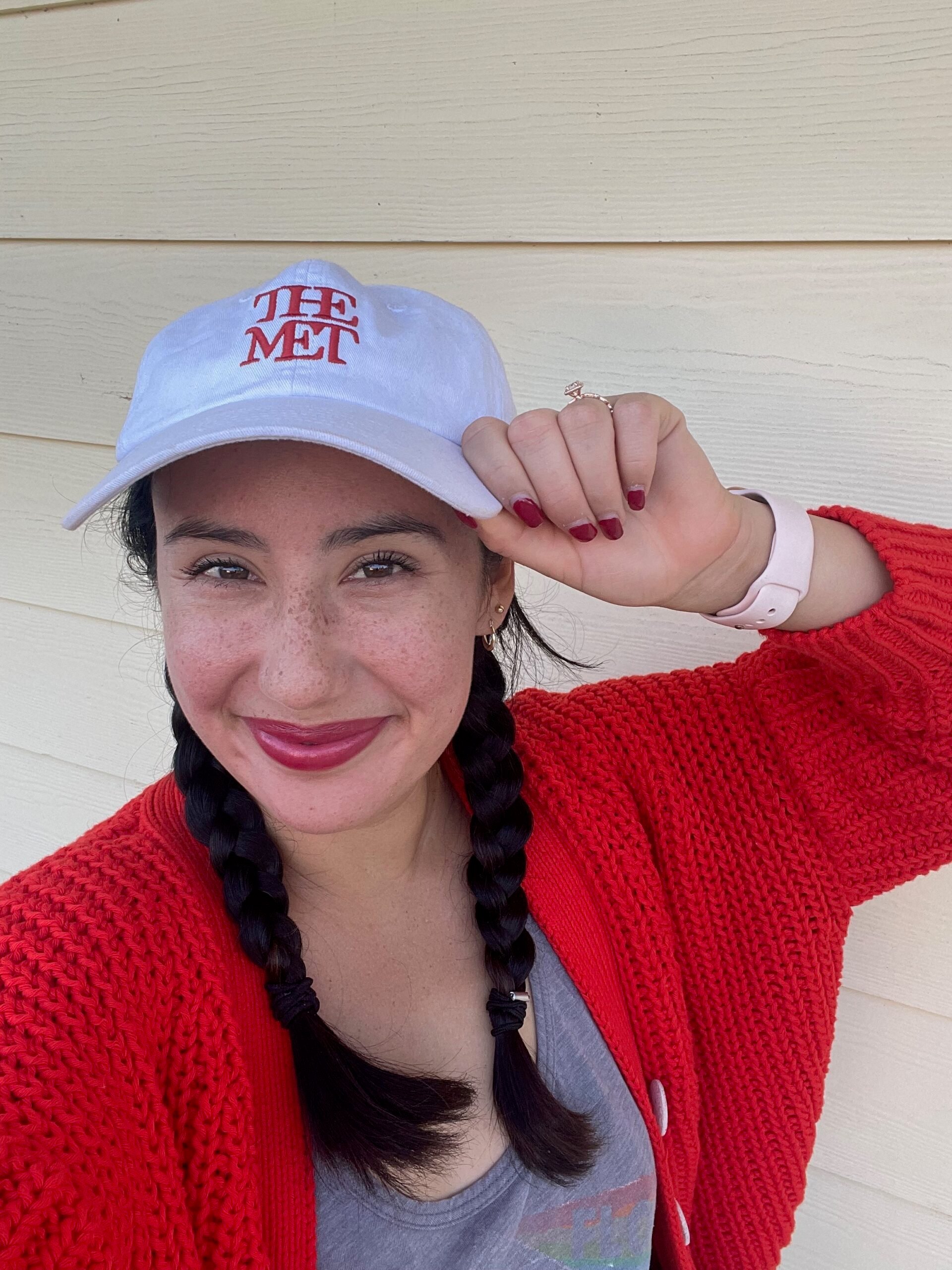 Our first day was rainy and windy, and I soon spotted a uniform repeated by many men and women: a sweater under a trench coat, topped with a baseball cap. After my tenth sweater/trench/cap sighting, I told my husband, “ I need to ditch this rain jacket for a trench,” to which he replied, “Yeah, no.” But a couple days later, even after the weather had cleared, people were still going hard on the caps, which made this hat person proud. I returned home with a Met hatwhich felt like the perfect souvenir.

Have you been anywhere new-to-you this year? If so, what did you notice? I’d love to hear!

* I first visited New York City when I was 10, and one of my core memories is almost throwing up in the Empire State Building elevator. Almost!