It’s been in testing for a while, but Instagram has expanded access to a new option which enables some creators to add multiple links to their IG bioas a means to help expand their business-building potential in the app.

As you can see in this example, via hairstylist Sarah Pagethe new multiple link option is currently being tested with selected creators in the app.

In the link section of the profile, you can see that, at the right of the main link, there’s a ‘and 2 others’ indicator, pointing to the additional URLs listed. Tap on that and you’ll get this pop-up of multiple URLs, providing the capacity to drive traffic to more sources direct from your IG presence.

As noted, the option has actually been in testing since October last yearwith variations of the format being tested in the back-end code of the app. 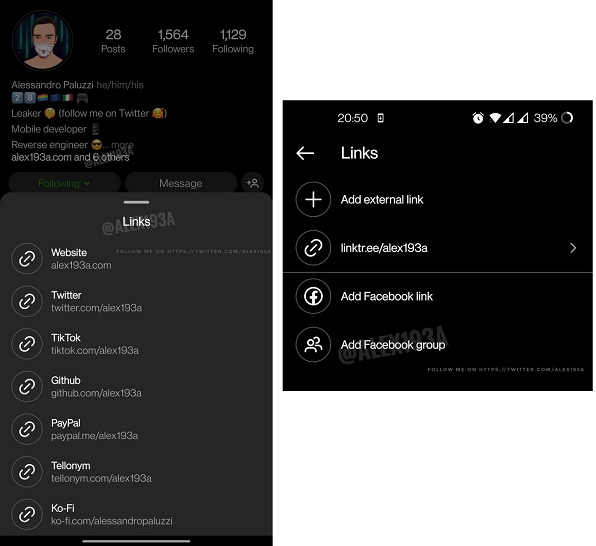 As you can see in these examples, among the various tests and additions (shared by app researcher Alessandro Paluzzi) is an option to add a Facebook Group link, along with an almost endless range of other URLs to whatever sites you like.

It’s not clear, at this stage, how many links users will officially be able to add, but the idea is seemingly to negate the value of third-party tools like Linktreewhich many IG users now utilize to add extra links to their bio in the app.

Instagram itself has recommended Linktree in the past, but now, it seems that it’s looking to provide more direct, native options to facilitate the same – which is likely bad news for Linktree itself.

According to InsiderMeta has confirmed that it is testing the new multi-link option, but it’s provided little detail on the planned roll-out or full functional specs of the tool.

There’s also no official info on who currently has access – so it’s possible that you can utilize this option right now, though it does feel a little unfinished, with the main display of URLs likely set to be revised some more before a broader expansion.

Either way, it could be a valuable addition, depending on your approach, providing more ways to drive traffic from your IG presence.