That’s good for LinkedIn, with it seeing continued increases in in-app activity – though it is also worth noting that Microsoft has reported ‘record levels’ of engagement growth for the app for now 16 straight quarters, which kind of waters down the meaning a little bit.

Because there are no actual stats here, there’s nothing to quantify what ‘record engagement’ actually means. There is the note that LinkedIn sessions grew 24%, but with LinkedIn also adding more usersyou would expect that, right? 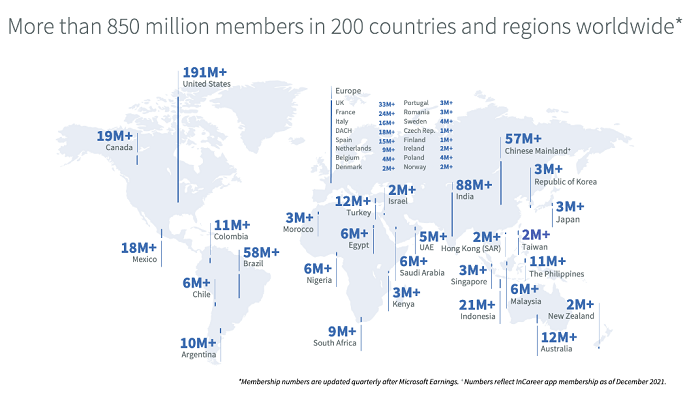 In fact, I have no idea what this map really represents, because LinkedIn was shut down in China last October, due to increasing pressure from the CCP on foreign companies operating in the region. So why LinkedIn claims to still have 57 million users in China , I don’t know – though maybe those are users of its job board app that it launched in replacement of LinkedIn proper?

In any event, it’s kind of difficult to make any real assessment of what LinkedIn’s usage data means, due to a lack of contextual markers that would illustrate its performance.

I mean, even active users would be valuable – as you can see here, the closest we get is total members, which is pretty much meaningless in regards to what sort of audience is actually engaging in the app.

But this is what we get. LinkedIn revenue is up, based mostly on its Talent Solutions recruitment tools and job ads, while active sessions continue to rise. At record levels.

That may or may not provide you with more impetus to put more focus on the Professional Social Network.

What Microsoft appears to be saying is that LinkedIn is doing well, based on its approach to content trends and engagement, and maximizing usage through various means.

While other apps have moved to align themselves with new habitual trends, with short-form video, in particular, taking precedence, LinkedIn, as per usual, has moved at a slower pace. Which, in some ways, likely lessens its engagement potential – though given LinkedIn’s more professional focus, it also makes sense.

Stories would have never worked on LinkedInwhether it jumped onto the trend earlier or not, while short-form video also doesn’t fit the platform’s ethos, and it seems wise for LinkedIn to take a more measured approach to such, as opposed to simply launching something like ‘LinkedIn Clips ‘, and trying to put a professional slant on the trend.

But with engagement rising, LinkedIn is trying to stoke those interactions with more generic, social media-like tools, including stickers, post templates, reactions and more.

Some of them seem to fit, but others not so much. It’s a bit of a tightrope for LinkedIn to walk, because more users are posting more personal, light updates, which are not related to their professional experience, yet, at the same time , those professional posts are the core of the app.

Leaning too much towards one of the other will be a mistake, so accommodating both is important. It’s just a question of how important each is, and what LinkedIn should be, on a fundamental level, in terms of differentiation and purpose.

Because LinkedIn can’t be Facebook, despite some increasingly trying to make it so, and it shouldn’t try to be TikTok, even if more people are using TikTok as a professional and career platform. No doubt LinkedIn is watching trends like this, especially among younger audiences – but it still seems like LinkedIn needs to stay hitched to its roots to maximize its opportunities in the broader social media marketplace.

But then again, if Twitter starts to fall apart under Elon Musk, and people go looking for alternatives, many professionals may well end up spending more time in the LinkedIn feed – and if that happens, LinkedIn will inevitably start to stray further from its original purpose over time.

Clearly, based on its noted usage stats, LinkedIn has been able to maintain the right balance thus far, for the majority of users. And there may be even more opportunity coming its way.