Social platforms are going all-in on the ‘Creator Economy’, adding in a range of new monetization tools and promotion features that are designed to help platform stars showcase their value for brands, or sell their products direct in-app.

The value of this is two-fold: for the creators, it enables them to keep doing what they love, and connect with like-minded people in social apps, while for the platforms themselves, it also keeps more original content flowing in, which , in turn, keeps their respective audiences coming back more often.

And for brands, that can also present new opportunities to utilize the latest platform tools and features, by partnering with creative talent that’s already well-accustomed with best practices, and has a track record of creating engaging content among your target markets.

On the surface, it seems like a great opportunity – but are creators really making money from their efforts?

According to a new study from Adobean increasing number of them are, with around 48% of creators now earning at least some money from their creative activities

The new report, which is based on input from over 9,000 online non-professional creators, also shows that 40% of monetizers are making more money online than they were two years ago, while 77% of them only started doing so in the past year.

You can download Adobe’s 35-page ‘Monetization in the Creator Economy’ report herebut in this post, we’ll take a look at some of the key notes.

First off, as noted, more creators are now monetizing their work, with many Gen Z creators, in particular, now making money from their online content.

As you can see here, those creators that are monetizing their online work are earning 6x the US minimum wage. I mean, the US minimum wage is notoriously low among developed nationsso maybe not the best measure of ‘success’. But the data does show that many influencers are now making reasonable money from their work, with almost half of monetizing creators noting that their online work now represents a significant portion of their monthly income.

Though the framing of these figures is also worthy of note. Rather than using annual income rates, which likely don’t look as good, Adobe has chosen to use hourly and monthly income comparisons, which are much smaller scale, and potentially make the comparative incomes seem better. Just a note on data presentation, which could be relevant on a broader scale.

Of those online creators that are making money from their work, Adobe says that photography and creative writing-related skills are the most common. 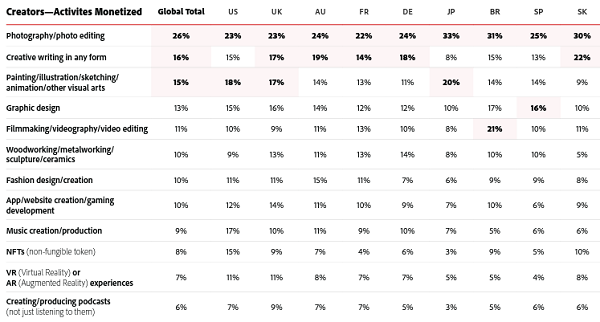 As you can see here, animation and design skills are also high on the list of in-demand creator talents, as is film-making and video editing.

It’s hard to know exactly what this means, as there’s no qualifier on what ‘creative writing’ entails in this respect, but these are the elements that seem to be driving monetization opportunities for online creators at present.

Though that’ll likely change in future, with 68% of respondents also noting that they believe the metaverse will bring new job opportunities.

Which relates to this next point – the report also shows that designers working in AR/VR are earning significantly more than other creators for their work. 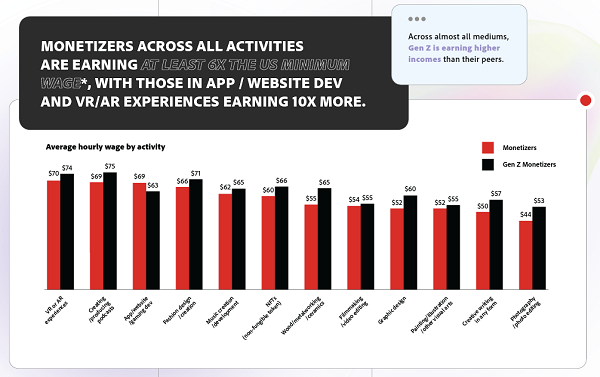 So how, exactly, are these creators monetizing their work? 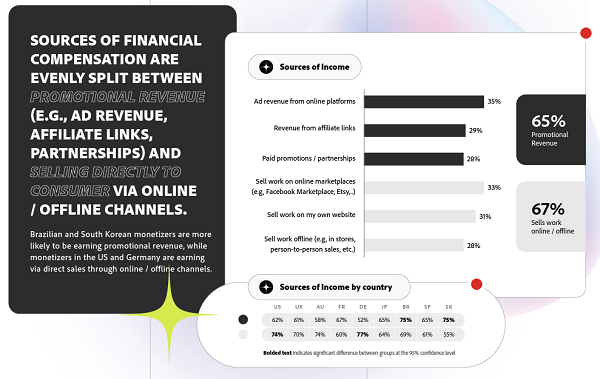 So online content creators are primarily monetizing via ads, while others are better able to promote their physical work and facilitate sales direct to consumers through digital platforms.

Also, the more followers you have, the more you can charge. 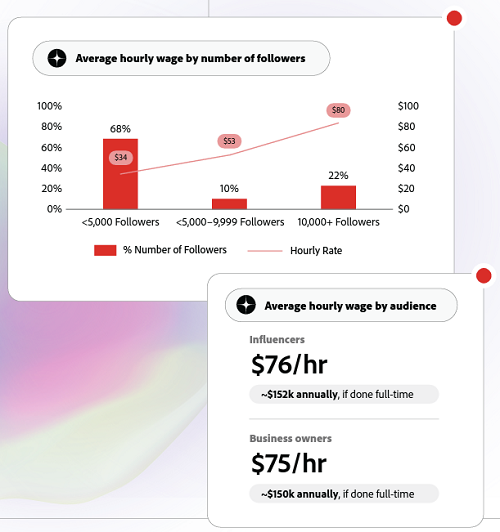 That probably goes without saying, but these stats, based on user-reported estimates, do provide some additional scope as to what the comparative rates charged are, based on audience tiers.

There are some interesting notes here on how online creators are monetizing their work, and the expanded opportunities that these platforms now offer, in terms of reach and exposure. The data also suggests that more people are indeed looking for opportunities to monetize – which could be a good opportunity for brands to reach out and arrange content deals with creators that align with their audience and niche.

And based on their follower count, you also have some scope as to what you should expect to pay, dependent on the complexity of the work.

You can check out Adobe’s full ‘Monetization in the Creator Economy’ report here.