data.ai, the company formerly known as App Annie, has published its annual overview of app performance trendshighlighting all the key shifts and developments of note in 2022.

The 91-page report includes a heap of insights across various app sectors. You can download the full report here (with email sign-up), but in this post, we’ll take a look at the social media-specific insights, and what the key trends were in social apps over the last year.

First off, data.ai highlights the rise of BeReal, which saw a big jump as users sought a more authentic, simple social media experience.

As per the report:

“Be Real broke out as a popular social sensation in 2022, appealing to users by selling a more authentic, less curated, experience. In fact, no social app has added more new users in the US in any of the past five years than Be Real’s 5.3 million in August 2022.“

That stat, in isolation, could be a little misleading, as BeReal didn’t crack the most top download stats, overall, in most regions.

As you can see, that crown remains safely in the clutches of Meta, though TikTok also performed well in most markets.

The challenge for BeReal now, as data.ai notes, is diversifying and building on that attention, because while prompting users to share a picture once a day obviously has a level of appeal, there’s not a lot of engagement or monetization potential within that.

Which may not be an issue – BeReal itself still seems undecided if it even wants to incorporate adsBut then again, at some stage, it’ll have to fund its costs, so it’ll need to incorporate some form of add-on or advertising to generate income in the app.

It remains to be seen whether that’s a bridge that it’ll be able to encourage users to cross.

TikTok, meanwhile, is the other key talking point of data.ai’s social report, with the insights also showing that TikTok generated the most in-app revenue of any social app in 2022. 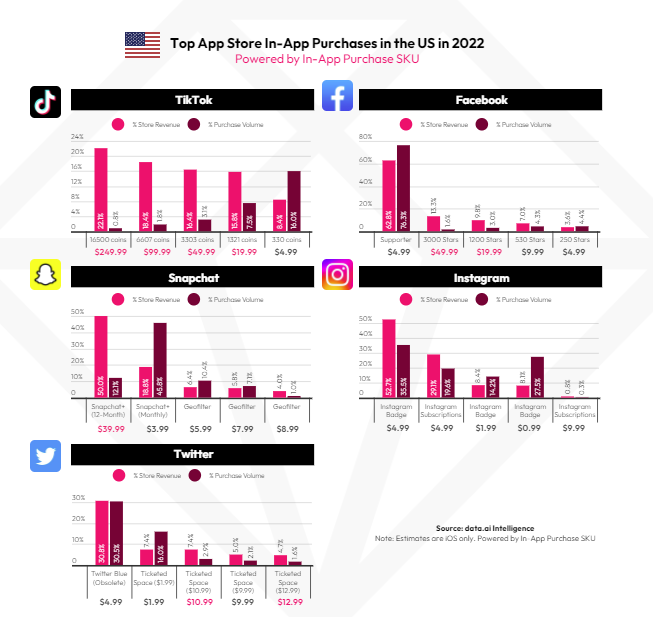 As you can see in these charts, which break down exactly what people were buying in each app, TikTok has sold a heap of its in-app Coinswhich enable users to donate money to creators or buy items in-stream.

Those are particularly popular on live-streams, enabling users to make purchases and contribute to broadcasters in the app. Live-stream shopping, overall, hasn’t become a major trend outside of China as yet, but the stats here show that more TikTok users are buying in-app currency, which points to future potential for the process, if it can get it right.

As you can see, Snapchat’s Snapchat+ subscription option has also fared reasonably well, in terms of in-app purchases, while Instagram’s live-stream badgeswhich highlight your comments in-stream, have also been relatively successful, in comparison to its other offerings.

Though these aren’t actual purchase amounts, so it’s hard to put any real stock in the value of these stats.

data.ai also notes that the US has now passed Japan and China to become the top market for consumer spending for social apps, while smaller markets are also seeing more growth in in-app spend.

“Markets outside of the big three (the US, China, and Japan) only combined for 30 percent of consumer spending in 2019. This climbed to nearly 40 percent in 2022 while global spending more than tripled over this period.”

That, again, points to the potential for in-stream shopping, along with creator monetization, if each platform can get its respective offering/s right. Consumers are increasingly willing to spend in-app, it’s now a matter of incentivizing that action, and facilitating better payment experiences and options, in order to lean into and grow that behavior. 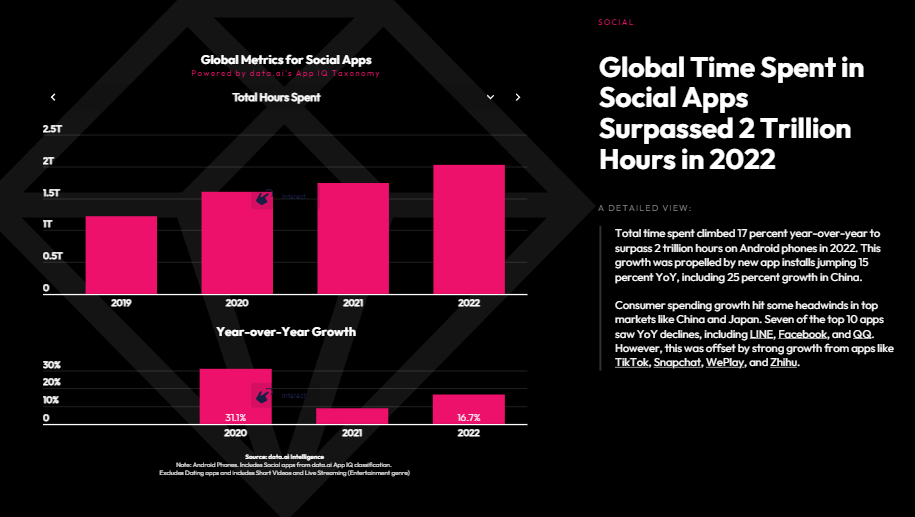 Clearly, social apps continue to dominate attention, with mobile video increasingly taking up more and more user time, which remains a key trend of note for marketers looking to maximize attention and reach.

Overall, the data likely doesn’t reveal anything shocking or surprising, but it is worth noting the actual numbers behind the key trends, and what they may mean for future development.

And as you can see, TikTok would appear to be sitting on the biggest opportunity, based on both the time and money being spent in-app. If TikTok can further build on these behaviors – and avoid a ban in the US – it could go from strength to strength in 2023.

You can download data.ai’s full ‘State of Mobile 2023’ report here.